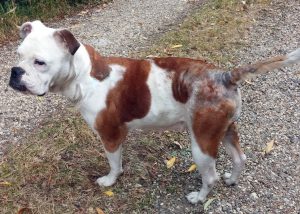 Princess is a 5 year old Olde Thyme Dorset Bulldog, who originally came to SESAW as an ex-breeding bitch in August 2016. She was in a terrible state (see photo), terrified and suffering from a neglected flea allergy with painfully sore ears. She was re-homed two months later, but became dominant with the other dogs in the house, and returned to SESAW in January, 2017.

She was by now in good condition, and admired by many – especially our volunteers! Most already had a dog at home, but one decided to try her out with her own dog, Cammy. After time, with much patience and love, Princess (Prinny) and Cammy became best friends. She even shares her food now! 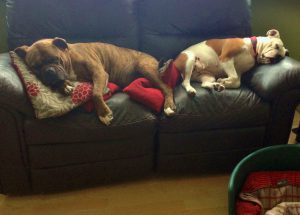 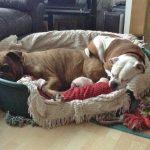 July 2017 – “Our beautiful Princess with her new best friend Cammy – a couple of book ends – not bad for a dog that was supposed to be re-homed as an only dog! How lucky are we?”

From Jeannette and Roger

Appointments are required to visit us.  Please call 01787 210888 and leave a message with your name and number to enquire.  Please also include a number whenever you email us.

Thank you for your patience 😊