“Maddy is settling really well. Both Maddy and Chunk have been racing around the garden enjoying the sunshine and that was after a nice long walk in the woods… : )

Just wanted you to know she had arrived safely and is enjoying herself. They have both finally gone to sleep after hours of fun!!   : ) ”

“She is doing really well and has settled in wonderfully. Chunk absolutely loves hers and they are always playing or sitting together. Last night was her third training class and she is doing fantastically and really getting into it. The first week didn’t go so well, she didn’t like one of the dogs in the class and barked at him so we spent the first lesson sitting with her back to him eating and just getting her used to the room, smells and being with other dogs. We bought a new lead from the class but we didn’t keep that for very long as she managed to grab it from the side and chew it up…. We feel so bless to have her, she is such a sweetheart even when she does nick stuff she’s not supposed to.   😀 ”
In August 2014,  Maddy’s new family decided to adopt a young cat from SESAW too.  Midnight had kittens in June 2014 and was looking for a new home once they were weaned.  Midnight is now called Lady and she loves her new doggy friends…

“Lady only snuggles with Maddy when she’s sleepy. She doesn’t try when Maddy’s awake. Thank you SESAW.”

From Mel and Mark 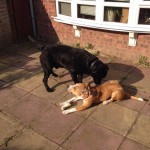 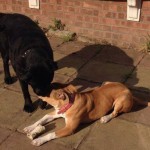 Maddie and her new friend Chunk 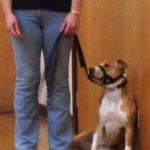 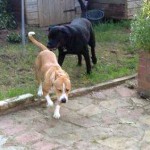 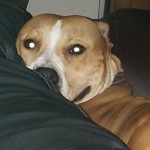 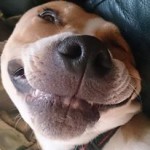 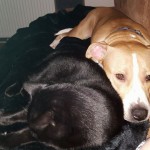 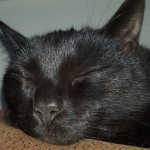 Appointments are required to visit us.  Please call 01787 210888 and leave a message with your name and number to enquire.  Please also include a number whenever you email us.

Thank you for your patience 😊