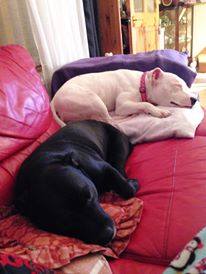 It wasn’t love at first sight, but since January 2014 her new owner has done a great job in bonding the two dogs – Bronx has decided she’s not so bad after all, and the two have become best friends.

Appointments are still required to visit us.  Please call 01787 210888 and leave a message with your name and number to enquire.

We do have space to take on animals in need so PLEASE do not abandon your pet!